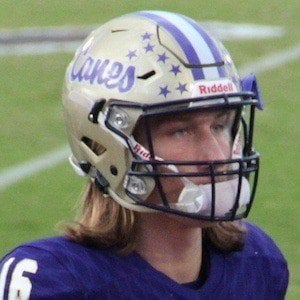 Quarterback who led Clemson University to an undefeated season and a national championship as a freshman in 2018-19. He threw for 3,280 yards and 30 touchdowns with only 4 interceptions during his historic freshman campaign at Clemson. He was selected first overall in the 2021 NFL Draft by the Jacksonville Jaguars.

He developed a love for football as a child and began playing in junior high school.

He played high school football at Cartersville High School, where he was named the 2016 Player of the Year by The Atlanta Journal-Constitution for having thrown for 3,904 yards and 51 touchdowns.

He was born in Knoxville, Tennessee and raised in Cartersville, Georgia. His parents are Jeremy and Amanda Lawrence. He has an older brother named Chase and a younger sister named Olivia. He began dating Marissa Layne Mowry in 2016 and the couple got engaged in 2020. They wed in 2021.

Trevor Lawrence Is A Member Of