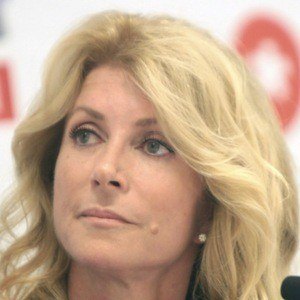 From 2009 until 2015, this Republican-turned-Democratic Party politician became a tenth-district member of the Texas State Senate. In 2014, she launched a Texas gubernatorial campaign, but lost to Republican candidate Greg Abbott.

After attending Texas Christian University and Harvard Law School, she served as a Fort Worth councilwoman.

In 2013, she attracted national media attention by spearheading a filibuster to block the passage of a bill aimed at limiting the accessibility of abortions in Texas.

Her three-year marriage to Frank Underwood began when she was eighteen years old and produced daughters named Amber and Dru. Her second marriage -- to Jeff Davis -- lasted from 1987 until 2005.

She and Sylvia Garcia both served on the Texas Senate.

Wendy Davis Is A Member Of