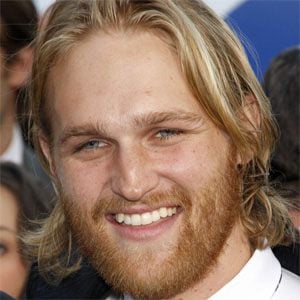 Former hockey player who has appeared in notable films such as Cowboys & Aliens, This Is 40, 22 Jump Street and Everybody Wants Some!! In 2016, he starred in an episode of Black Mirror called Playtest and later began starring in Lodge 49 in 2018.

He had an uncredited role as an Orphan Boy in Escape from L.A. in 1996.

He belongs to a family of actors with Kurt Russell and Goldie Hawn as his parents. His half-sister is Kate Hudson, and his half-brother is Oliver Hudson. He and actress Meredith Hagner tied the knot in 2019. In March 2021, they welcomed their son Buddy Prine.

He appeared in three episodes of the popular drama series The Walking Dead, which starred Andrew Lincoln.