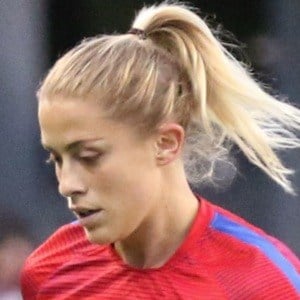 Defender who began playing for the North Carolina Courage of the National Women's Soccer League in 2017. She joined the U.S. women's national team in 2016 and she helped the team win the 2019 World Cup.

She started her career by playing for MVLA Avalanche in 2005. She also attended Sacred Heart Preparatory and played on the soccer team.

She was named Gatorade California Girls Soccer Player of the Year in 2010.

Her parents are Andrew and Susan Dahlkemper.

Both she and Sam Mewis played for Western New York Flash.

Abby Dahlkemper Is A Member Of