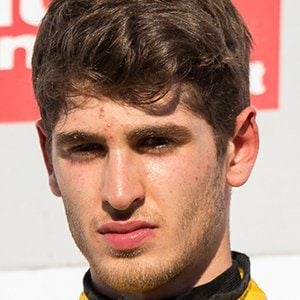 Italian racing driver who is best recognized for being the runner-up at the 2015 FIA Formula 3 European Championship. He is also known for his association with the Sauber racing team. He became a full-time racer for Alfa Romeo in 2019.

He first began his career in racing by karting from 2006 until 2012. He then began his single seater racing career by competing in Formula Pilota China in 2012. In 2013, he participated in the FIA Formula 3 European Championship as a part of the Double R Racing team.

He has competed in and won several races including first place at the 2015 Masters of Formula 3 race as a part of the Jagonya Ayam with the Carlin racing team. He has accrued a significant following on his antogiovinazzi99 Instagram account for his racing and lifestyle content.

He was born and raised in Martina Franca, Italy. He posted an older picture with his father to Instagram in February of 2018.

Other racers who competed in the Masters of Formula 3 race include Valtteri Bottas, David Coulthard, and Timo Glock.

Antonio Giovinazzi Is A Member Of