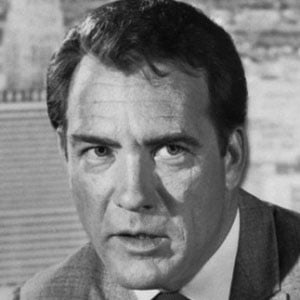 Television actor most well known for playing Dr. Alex Stone on the iconic sitcom The Donna Reed Show. He also played the title character in Judd, for the Defense, winning both a Golden Globe and a Primetime Emmy for the role.

While studying drama at Carnegie Mellon University, he was drafted into the US Army in World War II. Following the war, he finished his degree and became a radio DJ.

Being active in film, television, and stage, he performed in plays like The Night of the Iguana and The Long Day.

He was born in Pittsburgh, Pennsylvania. He died of lung cancer in Los Angeles, California. He had a son named Richard with his first wife Lois Harmon. His second wife Gloria was sister to actress Nita Talbot.

Carl Betz Is A Member Of