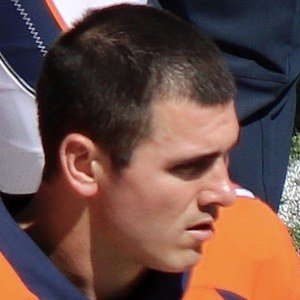 Quarterback of the Ole Miss Rebels who was recruited out of high school as a four-star top dual-threat QB. He played in five games for Clemson University before transferring to East Mississippi Community College for a year, leading the team to the NJCAA National Football Championship.

He performed in the Punt, Pass, and Kick competitions growing up.

He was redshirted as a freshman at Clemson in 2012 and was dismissed from the team in April of 2014 due to conduct detrimental to the team.

He was born to Kevin Kelly, the youngest brother of Hall of Famer Jim Kelly, and Charlene Cudzylo.

He enjoyed throwing to one of the top wide receivers in college football while at Ole Miss, LaQuon Treadwell.

Chad Kelly Is A Member Of