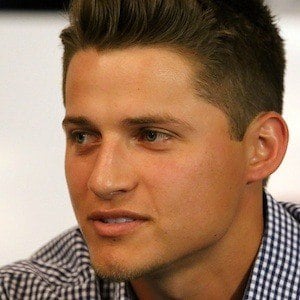 Shortstop who was selected 18th overall in the 2012 MLB Draft by the Los Angeles Dodgers. He went on to win the National League Rookie of the Year award in 2016. He helped the Dodgers win the 2020 World Series and he was named World Series MVP after hitting .400 with two home runs and five RBIs in the series.

He first played professionally for the Pioneer League's Ogden Raptors in 2012, hitting .309 in 46 games.

He de-commit from the University of South Carolina to sign with the Dodgers.

His brothers Kyle and Justin were also drafted into the MLB. Seager married his high school sweetheart, Madisyn Van Ham, on December 5th 2020.

He and outfielder Joc Pederson both came up through the Dodgers' organization.

Corey Seager Is A Member Of