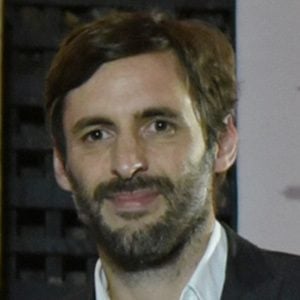 Chilean journalist who is known for his work with the Channel 13 network and with CNN Chile where he hosts the programs First Edition CNN Prime, as well as Ciudadanos. He has also written several books on the politics of Chile including Los Reyes Desnudos and Poderoso Caballero.

He studied journalism at the Pontificia Universidad Catolica de Chile. He then earned his Master's from Columbia University in 2012. His career as a journalist started with the Channel 13 network in 2000. He then joined CNN Chile in August of 2012.

He has won several awards for his journalism work including the APES Award for the Best Interviewer in 2011 and the Journalism of Excellence award from Alberto Hurtado University in 2011 as well.

He was born in Valdivia but was raised in Santiago, Chile. He married actress Blanca Lewin in 2014 and has a child named Eloy Matamala.

Fernanda Hansen is a fellow journalist and anchor who is also known for her work hosting several programs on the CNN Chile network.

Daniel Matamala Is A Member Of