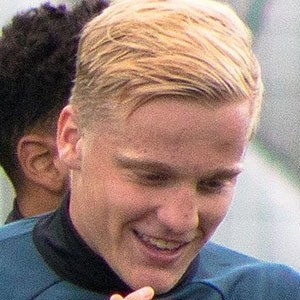 Midfielder who has gained fame for his career with the Eredivisie club Ajax, with whom he signed in 2015. He was named Ajax's Talent of the Future in 2015 while playing for reserve squad Jong Ajax. He began playing for Manchester United in 2020.

He helped Netherlands' U-17 squad earn a silver medal at the 2014 UEFA European Under-17 Championship. He finished as the runner-up in the 2017 UEFA Europa League and Eredivisie with Ajax.

His younger brother Rody is also a soccer player. His parents' names are Andre and Verdina.

He and Matthijs De Ligt have played as teammates for Ajax.

Donny van de Beek Is A Member Of