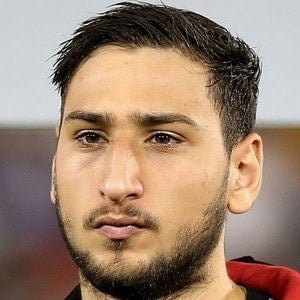 Professional soccer player recognized as a member of the Milan club Serie A and for playing with the Italian under-21 national team.

He began his youth soccer career in 2013 with Milan where, two years later, he would also make his senior debut.

In January 2016, he was praised by 1982 FIFA World Cup winning goalkeeper Dino Zoff, stating he was "predestined to become a great goalkeeper."

He was born in the commune Castellammare di Stabia in Naples, Italy to Alfonso and Marinella Donnarumma. His older brother, Antonio, is also a goalkeeper and has played for the Serie A club in Genoa.

He was lauded by his idol Gianluigi Buffon for being able to cope with the pressures of being a goalkeeper at such a young age.

Gianluigi Donnarumma Is A Member Of