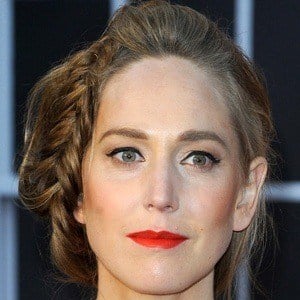 Prolific English stage and screen actress recognized for her recurring roles in The Bletchley Circle and Sense & Sensibility. She has also has roles in popular films like The Golden Compass and 2017's Beauty and the Beast.

In 2000, she earned a BA in English from New Hall, Cambridge. She made her screen debut at the age of seventeen in BBC's The Peacock Spring.

A former member of the Royal Shakespeare Company, she has starred in dozens of successful stage productions.

The youngest daughter of director Christopher Morahan and actress Anna Carteret, she has two siblings: Rebecca, a theatre director, and Andy, a music video and film director. She and director Blake Ritson have a daughter named Amity.

In the 2017 live action adaptation of Beauty and the Beast, she starred opposite Emma Watson and Dan Stevens.

Hattie Morahan Is A Member Of