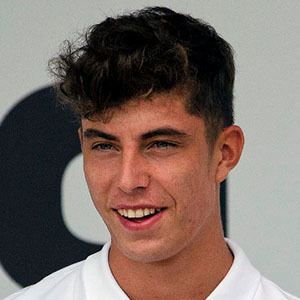 Midfielder who has gained fame for his career in the German Bundesliga for Bayer Leverkusen. He became the then-second youngest player in February 2019 to appear in 75 Bundesliga matches with the club. In 2020, he began playing for Chelsea FC.

He began his youth soccer career in the youth academy of Alemannia Mariadorf between 2003-2009. He later joined Bayer 04 Leverkusen's youth academy in 2010.

He won his second Fritz Walter gold medal at the U-19 level in 2018. He debuted for Germany's senior national team in 2018.

He was originally born and raised in Aachen, Germany. In late 2020, he introduced fans to his dog in a series of Instagram photos. He has been romantically linked to Sofia Weber.

He and Lars Bender have played as teammates for Bayer 04 Leverkusen.

Kai Havertz Is A Member Of