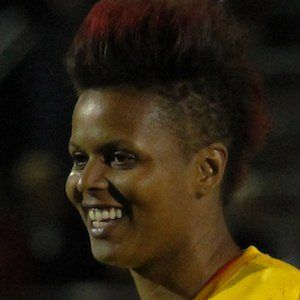 US-born Canadian international goalkeeper who made 110 appearances with the national team between 1998 and 2015. She also won a bronze medal at the 2012 Olympic Games.

She played college soccer at the University of Nebraska, where she was twice named to the All-Big 12 team.

Professionally, she played in the W-League, Women's United Soccer Association, and the National Women's Soccer League. She won gold at the 2011 Pan American Games.

She was born to Vans and Winsome LeBlanc in Atlanta, Georgia, but grew up in the Dominica and Canada.

She and Erin McLeod were teammates while playing for team Canada.

Karina Leblanc Is A Member Of