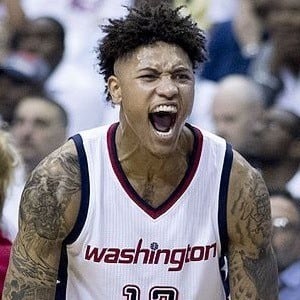 6'7" guard/forward who was selected 15th overall in the 2015 NBA Draft by the Atlanta Hawks, then immediately traded to the Washington Wizards. In 2020, he began playing for the Golden State Warriors. He played one season of college basketball at the University of Kansas.

He and his father moved from Louisiana to Texas in the wake of the destruction caused by Hurricane Katrina in 2005.

He averaged 22 points, 7 rebounds, and 2 steals per game as a high school player at Findlay Prep. He participated in the McDonald's All-American Game as well as the Jordan Brand Classic Game in high school.

His father is Kelly Oubre, Sr. and his mother is Tonya Coleman Oubre. He became engaged to model Shylyn in 2020. The couple welcomed a baby in 2021.

Kelly Oubre Jr. Is A Member Of