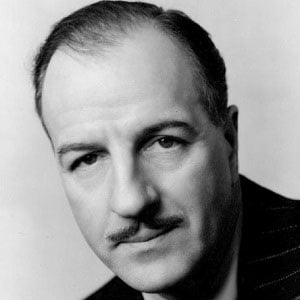 Best remembered for his Academy Award-nominated portrayal of Oliver Wendell Holmes in the 1950 film version of The Magnificent Yankee and for his performance in the Broadway production of the same play.

After serving in the United States Army during World War I, he rose to fame by starring in the 1921 New York stage production of Cobra.

He starred in the 1929 Broadway production of Gypsy and the 1950 film adaptation of the musical Annie Get Your Gun.

He died of a heart attack while filming the 1950 comedy movie The Teahouse of the August Moon; Paul Ford was subsequently cast in Calhern's role in the film.

Louis Calhern Is A Member Of