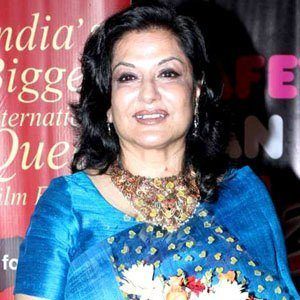 Actress in Bengali and Bollywood films who was arguably best known for her roles in Roti Kapada Aur Makaan, Benaam, and Zindaggi Rocks.

She was born in Calcutta and made her film debut with 1967's Balika Badhu.

She was nominated for Filmfare Awards for Best Actress for her work in Anuraag and Roti Kapada Aur Makaan.

She gave birth to two daughters: Payal and Megha.

She was directed by Deepa Mehta in the 2002 film Bollywood/Hollywood.

Moushumi Chatterjee Is A Member Of