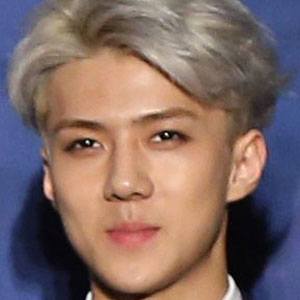 Rapper best known as the fifth member of the South Korean-Chinese boy band EXO. In 2008, he was cast into S.M. Entertainment after auditioning multiple times beforehand. He began appearing in Netflix's Busted in 2018.

Born Oh Se-hun, he was scouted on the streets by a casting agent when he was twelve years old.

He appeared in the music video for the single "Twinkle" by Girls' Generation.

He was born in Seoul, South Korea. He has an older brother.

He made a guest appearance in the sitcom Royal Villa alongside fellow EXO member Chanyeol.

Sehun Is A Member Of