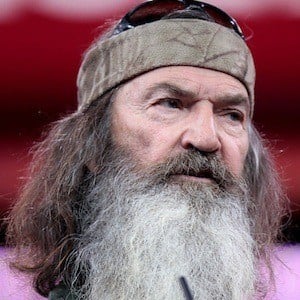 Duck Dynasty star who founded the enormously successful duck-call business Duck Commander. He was suspended from A&E after calling homosexual behavior sinful in an interview with GQ.

He was drafted to play quarterback in the NFL after a successful college career at Louisiana Tech University, but turned it down.

He married Kay Robertson in 1966; the couple has four sons: Alan, Jase, Willie and Jep.

He was teammates with future Hall of Fame quarterback Terry Bradshaw at Louisiana Tech University.

Phil Robertson Is A Member Of