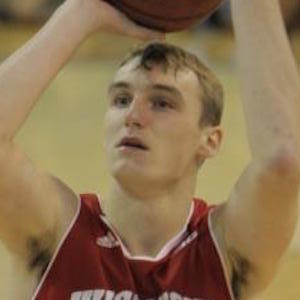 Forward who helped lead the University of Wisconsin Badgers to the Final Four in 2014 and to the NCAA Championship game in 2015. He was selected 18th overall in the 2015 NBA Draft by the Houston Rockets. In 2017, he signed with the Los Angeles Clippers.

He was a Parade All-American and Wisconsin's Mr. Basketball as a senior at Sheboygan Lutheran High School.

He scored a career high 27 points, hitting all six of his second half field goals including five three pointers, in the 2015 Elite Eight against Arizona and was named 2015 NCAA West Region's Most Outstanding Player.

He was born in Sheboygan, Wisconsin to Todd and Carol Dekker and raised with two older siblings, John and Hannah. His father was his coach at Sheboygan Lutheran. On July 15, 2018, he married ESPN reporter Olivia Harlan.

He played for coach Bo Ryan at Wisconsin.

Sam Dekker Is A Member Of