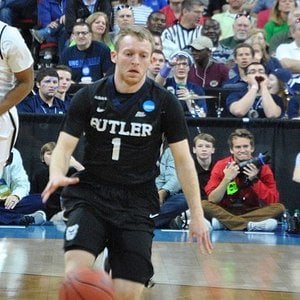 Basketball guard known for his time with the Butler University Bulldogs. He transferred to the team after playing at North Carolina State University from 2012 to 2014.

He was a McDonald's All-American in high school and was named Virginia's Gatorade Player of the Year in 2012.

During conference play as a member of the North Carolina State Wolfpack in 2013-2014, he recorded 70 assists against 15 turnovers, a school-record ratio of better than 3.5 to 1.

He was born to Rick and Margaret Lews. He has a brother named Colby and sister named Bridgett.

He played alongside TJ Warren while at NC State.

Tyler Lewis Is A Member Of