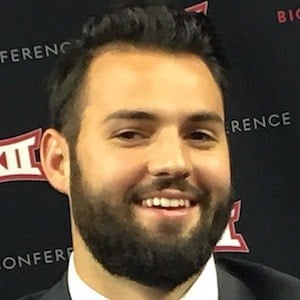 Highly recruited quarterback who signed with the University of Florida in December of 2012, then transferred to West Virginia in 2016. In 2019, he was selected in the third round of the 2019 NFL Draft by the Carolina Panthers. He is a dual threat player who can make plays with both his arm and legs.

He played his high school ball at Davidson Day School.

He turned down offers from big programs including Auburn, Tennessee, and Arkansas to play with Florida.

He is the oldest of four siblings. His two younger brothers are the internet sensations Nash and Hayes Grier and his sister is named Skylynn. In 2016, he married Jeanne Marie Grier. He and Jeanne welcomed their first daughter, Eloise, on November 10, 2016. Their second daughter, Adeline, was born on January 28, 2020.

Will Muschamp recruited him to play football at Florida, then after Muschamp's firing, Jim McElwain became his coach.

Will Grier Is A Member Of