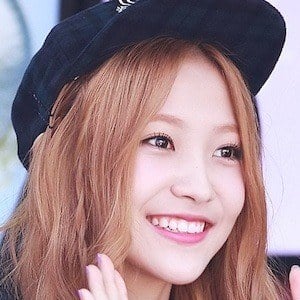 Youngest member of the South Korean girl group Red Velvet who serves as a vocalist and rapper. She first appeared on the group's mini album Ice Cream Cake.

She became an official member of Red Velvet in March of 2015 after having performed in Red Velvet's debut song "Happiness" as an unofficial member. She was brought up through S.M. Entertainment's pre-debut group S.M. Rookie.

She earned the nickname of Squirtle. She was the co-host of MBC's Show! Music Core with Cha Hak-yeon and Choi Minho.

Her real name is Kim Yerim and she was born in Seoul, South Korea.

She and Red Velvet group mate Irene were together as part of the S.M. Rookies as well.

Yeri Is A Member Of