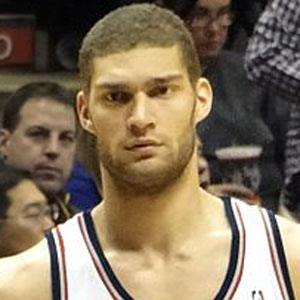 NBA center known for his low-post presence. He played in his first All-Star game as a member of the Brooklyn Nets in 2013. He signed with the Milwaukee Bucks in 2018 and helped the team win an NBA championship in 2020-21.

He was a First Team All-Pac 10 selection at Stanford University in 2008.

He was drafted 10th overall by the Nets in the 2008 and quickly became one of the team's top offensive weapons.

His twin brother, Robin Lopez, was his teammate at Stanford and entered the NBA the same year he did.

He became teammates with Joe Johnson when Johnson was traded to the Nets in 2012.

Brook Lopez Is A Member Of