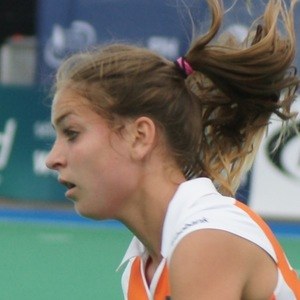 Dutch professional field hockey player who is known for her work on the Netherlands national team as a midfielder. She is also known for having helped win the gold medal at both the 2008 and 2012 Olympic games for the Netherlands.

With a passion for the sport early on, she first earned recognition for her midfield playing when she helped the AH&BC club win bronze at the 2006 Championships in Amstelveen. The following year, she won her first gold medal at the same championships in Quilmes.

She was born and raised in Zeist, Netherlands.

Eva de Goede Is A Member Of