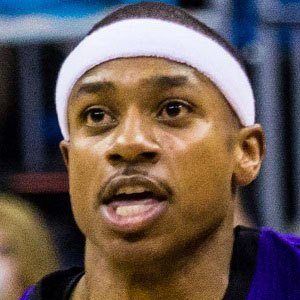 Known as The Pizza Boy, he is a 5'9" point guard who began his NBA career with the Sacramento Kings in 2011. He went on to play for the Phoenix Suns, Boston Celtics, Cleveland Cavaliers and Los Angeles Lakers. He signed with the Denver Nuggets in 2018 and the following year joined the Washington Wizards.

He attended the University of Washington, where he was selected to the All Pac-10 team in all three years he played with the team.

He recorded his first NBA double-double with 23 points and 11 assists in February of 2012. He was named to his first All-Star game in 2016.

He was born in Tacoma, Washington to James and Tina. He married Kayla Wallace in 2016 and he has two sons, Jaiden and James. His half-sister Chyna passed away in a tragic car accident in 2017.

At UW he wore the #2 jersey that was previously worn by another undersized NBA great, Nate Robinson.

Isaiah Thomas Is A Member Of