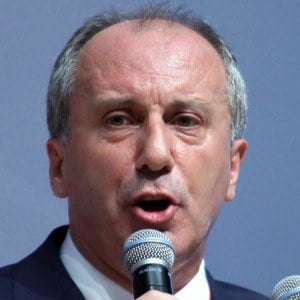 He graduated from Balikesir University and began working as a physics teacher and school principal. After he was elected as president of the Ataturkist Thought Association, he began his career in politics in 2002 when he was elected as the Republican People's Party MP.

After losing the 2018 Turkish Presidential election, he was featured in a range of press outlets and articles such as The Washington Post, The Guardian, and The New York Times where he warned the country and its citizens against Turkey's "One-Man Regime".

He was born and raised in Elmalik, Yalova, Turkey. He married Ulku Ince and together they have one child.

As leader of the Ataturkist Thought Association, he supported the secular organization and ideas presented by Mustafa Kemal Ataturk, the founder of Modern Turkey.

Muharrem Ince Is A Member Of