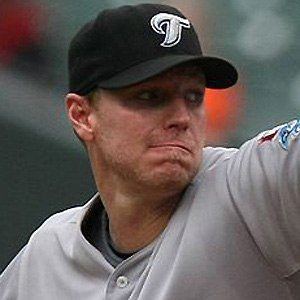 All-Star pitcher known as "Doc" who won the Cy Young award twice, in both the AL and NL, and pitched a no-hitter in the playoffs for the Philadelphia Phillies in 2010. He retired with 203 wins and a career 3.38 ERA.

He lost a no-hitter in the ninth inning in just his second career MLB start.

Four months prior to throwing his no-hitter in the playoffs, he threw a perfect game, making him the fifth player ever to record multiple no-hitters in one season.

He married Brandy Gates on November 27, 1998 and they had two children together.

He became the second player to throw a no-hitter in a playoff game, more than 50 years after Don Larsen threw the first.

Roy Halladay Is A Member Of