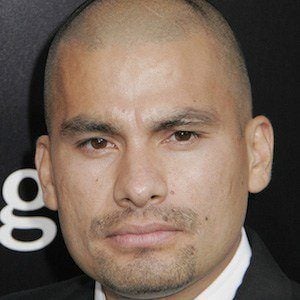 Television actor most known for his debut role as Leonel, one of the cousins, on season 3 of AMC's Breaking Bad. Since that role in 2010, he has landed a variety of recurring roles on television shows such as FX's Justified and USA's Graceland. He also played Eddie in the 2015 film McFarland, USA.

His brother Luis Moncada was an actor before him and went into the audition for one of The Cousins on Breaking Bad. When it was clear they were interested but needed someone who looked like him, he suggested his brother, who had wanted to break into the acting world.

He has done his own stunts during his roles for Breaking Bad, the 2014 film Sabotage, Justified, and TNT's Southland. He is also a boxing coach in Pacoima, California.

He and his brother were born in Honduras but raised in Echo Park, Los Angeles, where both of them joined a gang. After Luis was arrested and had to go to jail, they decided to move away and settle down in Studio City.

Breaking Bad creator Vince Gilligan decided to cast the brothers because of the authenticity they lent to the roles.

Daniel Moncada Is A Member Of